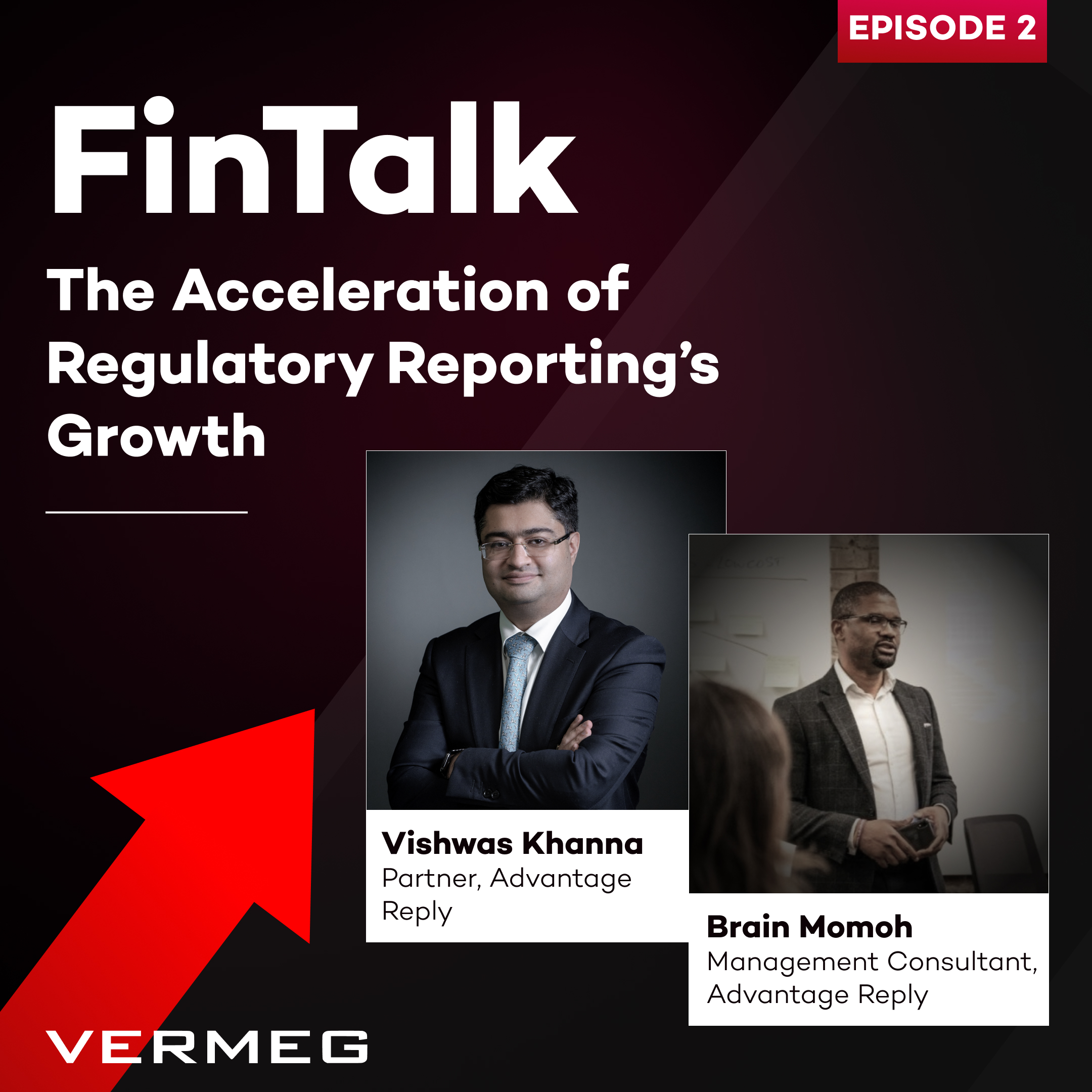 Given the invention of the double entry bookkeeping system came many centuries ago, regulatory reporting is in its relative infancy when compared to financial reporting. So how can we better instigate its growth to catch up?

Joining us on FinTalk this week to consider the complex nature of regulatory reporting and how we can boost its evolution are Advantage Reply’s Vishwas Khanna & Brain Momoh.

Vishwas & Brain delve into cascading accountability from the top down, simplifying the subjective nature of the sector’s use of interpretations, and the cost of misreporting ESG that elevates its importance far beyond CSR.

This episode of The VERMEG podcast covers:
How the approach to regulatory reporting standards has evolved in recent years, and its current trajectory
The process of establishing organisation-wide accountability
Being more proactive and accelerating the growth of the reg reporting sector
Key differences that emphasise the increasing focus on ESG over CSR

“Reg reporting as a discipline is young; it’s been around for less than 50 years in the financial services industry. The first roots of financial reporting was set somewhere in the 13th-14th century with the invention of the double entry bookkeeping system. So financial reporting has had a much longer development lead time with lots of false starts, progress, harmonisation of standards & international practices, and reg reporting is currently on the same journey, but with a much later headstart.” – 4:00 – Vishwas Khanna

“Initially, the focus of the regulators was on ensuring that the right principles are articulated when it comes to the quality of regulatory reporting. But over the last 10 years now, more and more standards are being set explicitly by regulators about what they expect from regulatory reports, from the interpretation of individual data points to how those data points come together to form a meaningful set of reports.” – 6:50 – Vishwas Khanna

“There’s been a few Dear CEO letters in the past, but you can almost taste the frustration of the PRA on that letter in terms of words like ‘frustration’ and ‘slow progress’. It’s quite obvious that they feel it’s been slow in terms of the progress regulatory reporting is making compared to what you’ve had in financial reporting.” – 14:10 – Brain Momoh

“As we know, a model is only as good as whatever assumptions you give it. Two firms might have a completely different view on how things have been interpreted, depending on how they present the products and how they look at things. So given the nuance with reporting, it’s not surprising we’re in this position, but that’s not to say firms cannot do more.” – 16:10 – Brain Momoh

“A number of reports need to go through a process of interpretation, because a particular data point as it’s defined in a statutory account or in a financial report might not be the same as a definition for a regulatory report. So you need to clearly understand the regulatory interpretation of every single data point and see what needs to be brought in, taken out, amended, edited, enhanced for that number to make sense for that regulatory report.” – 22:50 – Vishwas Khanna

“We’ve already seen not just letters coming in from the PRA or regulators showing the importance of ESG, we’ve also, from clients perspective, seen the demand of work and interest. Someone asked me the question once, how do you define ESG besides just a title? I said, ‘Well, ESG is not CSR. It’s CSR on steroids.’” – 27:50 – Brain Momoh

“If a number goes wrong, there’s obviously an issue from a financial penalty perspective. But in the case of ESG reporting, the reputational construct and conduct issues are significantly higher.If I report an ESG number wrongly, there’s a reputational issue from a much wider perspective. We’ve seen instances where greenwashing has come up quite a number of times now and there’s been a fallout. The reputational component isn’t about the general public, it’s about your employees and your customers.” – 32:45 – Vishwas Khanna